2018 a year of bureaucracy learning

Nothing like a bee sting to get you moving

Couple days ago I was playing with a simple GPS from my mother and I
realized that in future, not so far away, touch-screens probably will
be ubiquitous as mouses are. Well, in fact I discovered that a lot of people are working on this and I have too some thoughts about how computers will interact with us in future.

No all talking interface ("Computer do this, do that..."), but certainly touch-screens all around (see this too). You can see some movement in this direction with the new gadgets of Apple, the iPhone and iPod Touch.

Its fantastic how the desktop manipulation is getting better, be amazed with BumpTop, now think about that kind of behavior with a touch-screen. Since my hypothesis is that will be only touch-screens lets see how a notebook will look in the future, this is a two screens laptop (a rough example below). 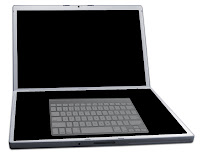 Note that we can think in a computer that will resemble a todays laptop but with a crucial difference, there is no keyboard. To get the idea think in one computer with another screen in the place of the keyboard. You can slide your finger and a "virtual keyboard" will appear and you type normally, another gesture and the keyboard goes away.

As iPhone and iPod Touch, if you turn the computer like a book the screen turns too and the pages of your document takes both sides of the laptop and you can turn pages with a finger slide.

This sounds like document oriented only, but how about applications? Well, see this two demonstrations of XGL + Linux (here and here) and think about how this will work in a two screens laptop.

With a two screens laptop we can use it like a real paper sheet notebook, you can turn it, get a pen and draw some diagrams, not write texts, I think keyboards are more useful for writing than pens on a touch-screen, but is possible too.

The number of possibilities kind explode with a two screens laptop, some fancy controls can pop in the under screen like "virtual knobs" to raise the volume of your music, some very fun games and any stuff you can think of, making the desktop metaphor (after decades) more closely to the real desktop but very powerful.